Prophecy Wars: The War to End All Wars and Stop the Antichrist

Home > Books > Prophecy Wars: The War to End All Wars and Stop the Antichrist 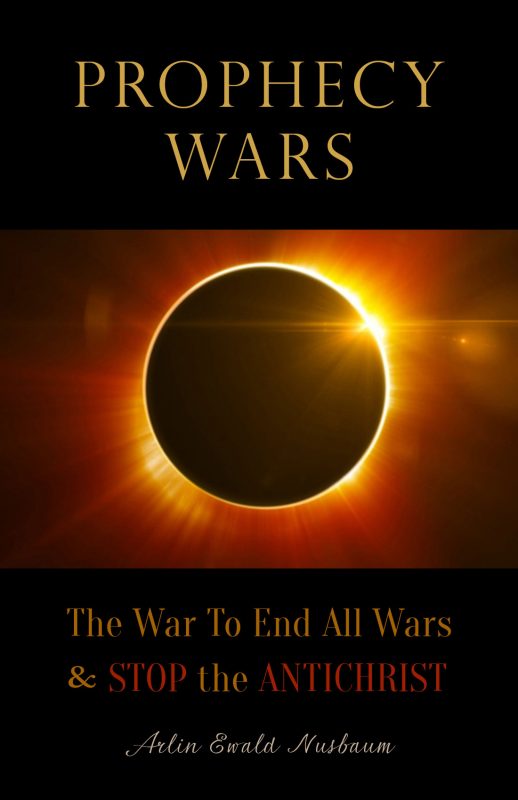 This book has been partly preempted by EXODUS (2022).

The apostles believed Jesus would return during their time thus the prophecy of Jerusalem’s destruction, and the prophecy of Jesus’ return run together in the four Gospels. The conjoining of those two prophecies has led prophecy writers and commentators to forecast the destruction of Jerusalem (again) before Jesus returns. That view is incorrect. Those prophecies of horror were fulfilled by 70 A.D., and the Jews have returned to their homeland—NEVER to be destroyed again:

20 But I will remove far off from you the northern army…and my people shall never be ashamed. (Joel 2)

When Jerusalem became a state in 1948, that signaled the end of the Time of the Gentiles; Jerusalem will no longer be trodden down. The same is true for America; she will not be destroyed either. The only remaining prophecies of terror are those described in John’s Revelation, and those involve the Antichrist and the mark of the beast, etc. which are NOT set in stone.

The prophecy of deception in the temple by the Antichrist/Man of Sin has ALREADY been fulfilled. The “temple” is our body, or the body of Believers, as defined by the apostle Paul who gave it:

19 Know ye not that YOUR BODY IS THE TEMPLE of the Holy Ghost? (1 Corinthians 6)

Prophecy writers should use Paul’s temple definition to interpret his temple prophecy (2 Thessalonians 2:4). Once these points are understood, Believers will come to realize there is just one enemy on this earth with whom they have to do, and that enemy is us.

We are the enemy of the world with our self-righteousness, pride, and money-driven Christian enterprises. Each Christian Church and ministry believes they are winning—their own battles. However, those campaigns are causing them to lose the greater war over our communities, cities, states, and nations—on all fronts: political, financial, educational, poverty, crime, public debt, quality of life, etc.

Our withdrawal from public affairs, and our duplication of community services “in the name of Jesus” is not scriptural. Modern Christianity has gone far beyond the scope of what Jesus originally taught, but because of the prayers of a few righteous people, we have been given a seven-year-period-of-grace.

This period is marked from the one eclipse (August 21, 2017) to the next (April 8, 2024), and coincides with the two terms of President Trump. If we do not repent, the wrath of God will be poured out via the Antichrist and the horrors described in the Revelation of John and the righteous will be removed in The Rapture.

The forecast is quite positive, and I will show by ancient and (reliable) modern prophets that this is indeed the case. I honestly believe that if Believers can agree to the prophetic outcome from this point forward, it can unify Believers and disengage them from doctrinal differences, and their lack of direct involvement with the public on all levels.

If you do not believe in:

– Seven years of grace
-The removal of the wicked
-The arrival of the armies of God
-The Sign of Jesus’ coming
-The coming of the New Jerusalem
-A new heaven and new earth
-God’s glory to be poured out (not more of the Holy Ghost)
-God to “cut His work short” in righteousness
-The sky “unrolling like a scroll”
-A rebuilding of the waste places
-Wealth transfer to the righteous
-The gospel Jesus originally taught being re-sent
-The arrival of the Ancient of Days
-The resurrection of the righteous
-The removal of the 144,000 (i.e. the “first” fruits)

Then you are on the wrong-side of the Prophecy War!