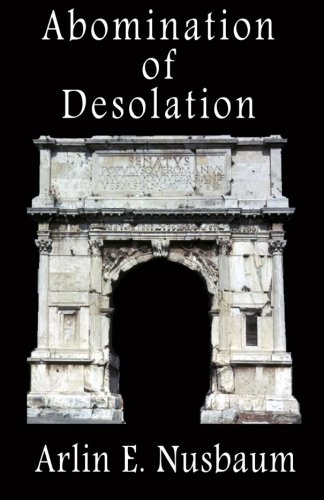 24 Seventy weeks are determined upon thy people and upon thy holy city, to finish the transgression, and to make an end of sins, and to make reconciliation for iniquity, and to bring in everlasting righteousness, and to seal up the vision and prophecy, and to anoint the most Holy.
25 Know therefore and understand, that from the going forth of the commandment to restore and to build Jerusalem unto the Messiah the Prince shall be seven weeks, and threescore and two weeks: the street shall be built again, and the wall, even in troublous times.
26 And after threescore and two weeks shall Messiah be cut off, but not for himself: and the people of the prince that shall come shall destroy the city and the sanctuary; and the end thereof shall be with a flood, and unto the end of the war desolations are determined.
27 And he shall confirm the covenant with many for one week: and in the midst of the week he shall cause the sacrifice and the oblation to cease, and for the overspreading of abominations he shall make it desolate, even until the consummation, and that determined shall be poured upon the desolate. (Daniel 9:24–27)

3 Let no man deceive you by any means: for that day shall not come, except there come a falling away first, and that man of sin be revealed, the son of perdition;
4 Who opposeth and exalteth himself above all that is called God, or that is worshipped; so that he as God sitteth in the temple of God, shewing himself that he is God. (2 Thessalonians 2:3–4)

Thus believers, by and large, are waiting for a temple to be built in Jerusalem on Temple Mount and for the antichrist to set himself up therein to then break a “seven-year treaty” with Israel half-way through. They fail to realize Paul’s use of the term “temple” applies to the body of believers and no longer a physical structure. That was done away in Christ:

16 And what agreement hath the temple of God with idols? for ye are the temple of the living God; as God hath said, I will dwell in them, and walk in them; (2 Corinthians 6:16)

The body of Christ has been seriously misled by such a simple mistake. Paul’s New Covenant definition of “temple” must be used when interpreting Paul’s own temple prophecies. This title addresses many other prophecies including The Whore of Babylon, The Woman who flees into the wilderness, The Man of Sin, etc.